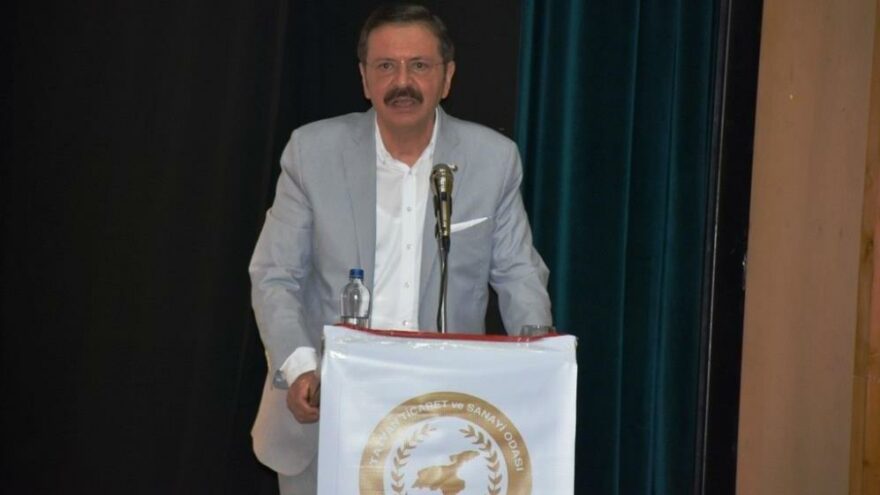 TOBB President Hisarkikloglu, who had come from Mus to Bitlis, first visited the Ahlat Seljuk Cemetery, the Ahlat Museum, the Presidential Complex and the 1071 Sultan Alperslan Lodge. Giving a brief statement to journalists at the Seljuk Cemetery, Hisarkioglu said, “I am very proud to be in Ahlat, which has a great meaning and spiritual value for us. I am here for the first time, I am very impressed. Our President and Many thanks to the governor. He gave a good explanation. Especially he said that every person living in Anatolia belongs to Ahlat. In fact, Ahlat is the entry point for all of us. We are citizens of Ahlat. We are here for the liars. Read Fatiha for the soul. May they rest in heaven, God bless them all. In these countries, if the Muslims live here today in Anatolia, they all have a great contribution. God bless everyone. We are here Came here for the first time. From now on, the state already owns the promotion of this place at the highest point. Hopefully we will contribute to promote our business world including Ahlat and Crater Lake.”

If there is unity, your back will not come to the ground

TOBB President Rifat Hisarkikloglu said that the way to become rich in commerce is through commerce and industry and added, “I am honored to be here on the occasion of the 50th anniversary of TATSO. Here is a very beautiful painting which I saw it. I was proud of it. As your brother, who has traveled all over Turkey, I say that there is unity in cities that have become brands. Where there is unity and unity, there is abundance of kindness. Cities that do this are always brand cities. You can see it in Gaziantep, Kahrmanmaras, Kaseri, Konya and Denizli. Cities that do this are branding. The element has become one heart, one wrist. Committed to development. If there will be unity in one place, you will definitely not have your back,” he said.

Hisarkikloglu said, “Bilal Adbas, President of the Tatvan Chamber of Commerce and Industry, is making great efforts for the development and promotion of Tatvan,” and continued as follows:

* TATSO has been recognized in these recent periods. There is star system in hotels, in our country and in the world. They are 5-star hotels that provide superior service. There is such a star system in the rooms in the world. We call this recognition. The organization that regulates the international independent room system oversees this proceeds. After saying that we were ready in principle, they came and inspected. Our Tatvn Chamber of Commerce & Industry is an absolute 5 star in terms of service quality standard.

* What does 5 stars mean. I don’t compare it with Turkey. The Paris, London, Berlin Chambers of Commerce and Industry are also 5-star. The quality and standard of service received by our members who receive service in Tatwan makes receiving no less quality service from a Paris merchant than from English and German merchants in Berlin. I would like to thank its management and all its employees for making our philosophy such a world city and bringing the quality of its service to world standards.

TOBB President Hisarcıklıoğlu said that he acted on behalf of 1 million 800 thousand businessmen and industrialists for TOGG, a 120-year-old dream of Turkey and a dream that was abandoned 60 years ago, adding, “I Gemlik came here from Bursa. There is TOGG. I did this work on behalf of 10 lakh 800 merchants and industry. It was a dream of our people 120 years and a dream broken 60 years ago. When the President said ‘What You can do it’, so I trusted the Turkish business world. Thank God, we will open the factory in Gemlik for the first time on October 29, with a 100 percent electric car, which we will run with world automobile technology, which There is a Turkish brand and everything is domestic, and 51 percent is domestic and national. Hopefully, we will see TOGG cars on Bitlis and Tatvan roads in March.”

Problems are solved through common mind and dialogue

Hisarkikoglu said that the way to become rich is through trade and industry, adding:

* Without business, it is not possible to become rich without selling your goods. It is not possible to become rich without production. The most auspicious of people are those who are useful. You are doing what is most beneficial to people. We are all very lucky. We all have gold keys. But for this to happen, there must first be peace in his home, city, country and neighbours. There is no business without peace. Commerce is sneaky. The way to become rich is business, and there is only one medicine for business and that is peace. When we put them together, there is nothing we cannot achieve.

* Mercy is with you, there is anger in being separated. As long as we don’t marginalize each other because of their views, beliefs, active origins, sects, whatever you can think of, different political views. If we don’t differentiate, we win together. Otherwise we will all lose together. Problems are solved through common sense and dialogue. The common mind is the only way forward. I congratulate all my brothers and sisters who will receive awards for their contribution to the Tatvan economy. (UAV)