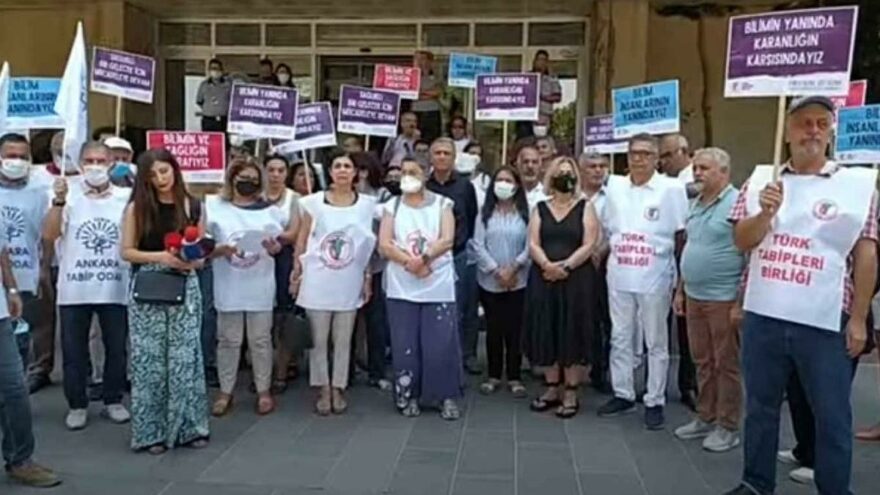 Gazi University infectious disease specialist Prof., who was threatened and attacked on social media at the call of the Turkish Medical Association (TTB). Doctor. Representatives of health and labor professional organizations that came together for Esin Davutoğlu enol said that targeting and threatening scientists is unacceptable.

In the speeches given, it was said that Esin Davutoglu Senol represented scientific and independent thought, and was targeted because he freely as a scientist, without fear and without hesitation, was an important social worker. had played the role.

It was said that despite taking no coercive action against the assailant, a clear threat and intent to life meant giving the person a pat on the back.

TTB Central Council President Sebanem Korur Fincanci said Esin Davutoglu Senol was chosen as a target because he told the truth despite the public health authority hiding many truths.

Fincancı said, “He put public health at risk through his opposition to vaccination, reversed the truth and played with that notion. He continued to mislead us as if those who threaten public health are public health.” The public authorities saw it. The way they saw people dying in an epidemic, they saw health institutions filling up with people, health workers disappearing in the process, these attacks continue. But we don’t see, we Let’s continue the struggle. We stand against those who threaten public health. We will continue to fight,” he said, adding that he stands with enol in all circumstances.

“Science will achieve as ever”

After calling all those responsible for the TTB to duty and reading the statement condemning the attack, Prof. Doctor. Esin Davutoglu Senol delivered the speech. Senol began his speech with the words of Martin Luther King, “Violence is immoral because it runs on hate rather than love, it destroys society and makes fraternity impossible” and called attention to this fact. Drew that a murder suspect cannot be completed within 45. Minutes are rolling around freely.

“If that event had happened that day, I believe there would have been great chaos, great sadness, great silence, great surrender,” Senol said.

enol said he can’t deal with what’s going on with the pandemic these days, and he spends most of his time in police stations.

“It is our social responsibility to ensure that the suspect does not become a murderer, and create stories where there is neither a killer nor a hero. No one should remain silent, they should stand up for vaccine policies and science.