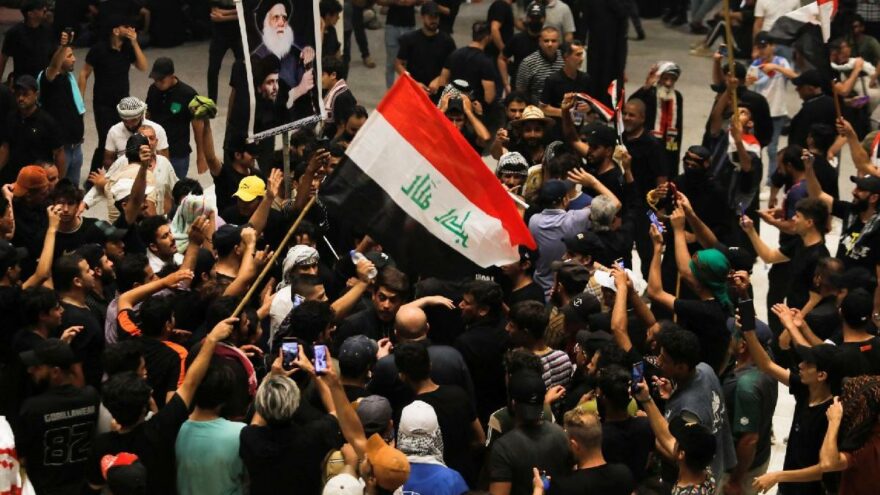 Protesters demonstrate in the Iraqi parliament after supporters of the Shia leader of the Sadr group, Muktada Sadr, raided the Iraqi parliament building in the Green Zone in the Iraqi capital Baghdad yesterday. It is noteworthy that the protesters moaned by playing drums and hit themselves with chains in their hands. While it was revealed that the demonstration was organized by Shias in Iraq, it was observed that some protesters tried to sell cigarettes, fruit juice, melons and watermelons in parliament.

It is also noteworthy that the protesters who started the dharna put up tents in front of the Parliament.

Iraqi Kurdish Regional Government (KRG) President Nechirvan Barzani: We follow the situation in Iraq with concern. We invite all political parties for peace, restraint and direct dialogue to resolve problems.

Stating that he respected the right to peaceful protest, Barzani said, “State institutions must also be protected, including the protection of people’s lives and property. IKBY, as always, will be part of the solution. We invite the political parties concerned in the country to the second capital, Erbil, to ensure a common solution.

Explanation from the United Nations

In a written statement made by United Nations (UN) Deputy Spokesperson Farhan Haq, it was emphasized that the parties should take immediate steps to defuse the situation in the face of events in Iraq, and call for a comprehensive and peaceful dialogue. In order to form an active and long-term national organization government capable of meeting the reform demands of the Iraqi people, all parties must put their problems aside.

Osama Nussefi, general secretary of the Muttahidun Party, one of the important and active names of Sunni politics in Iraq, said that the escalation of the political crisis to an alarming level could lead to serious consequences such as civil war, and added, “The parliament needs to review the election law.” An extraordinary session should be held to replace the Election Commissioner and conduct early elections,” he said.