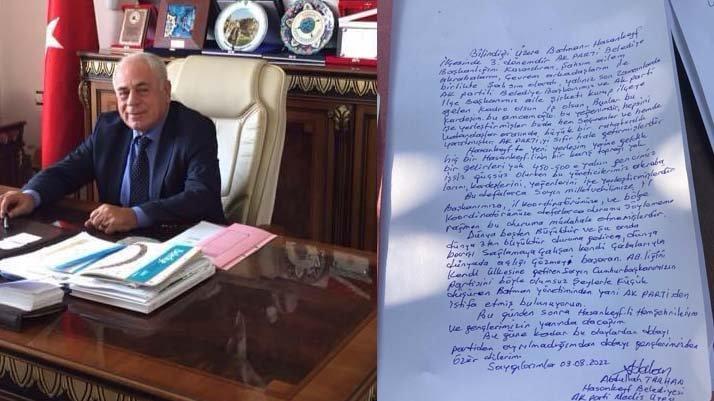 Abdullah Tarhan, deputy mayor of the Hasankife District Municipality of Batman from the AKP, said that administrators of the AKP district organization hired members of his family and announced that he had resigned from his party.

Speaking about his resignation, Tarhan said that he can no longer tolerate illegal purchases made.

“I can’t live this situation anymore”

Abdullah Tarhan, a member of the Hasankif Municipal Council, said that many youths in Hasankif are unemployed and therefore have to move to different provinces:

*We entered a new settlement from the old Hasankif, a new district was formed, but none of the citizens of Hasankif have an inch of land in this new district.

All the youth here are unemployed and powerless. Hasankife has hundreds of youths who go to Marmaris to work.

*At Hasankief, they recruit staff for the out-of-state hospital, they bring in outside staff into the museum directorate, and they bring in people from outside even when they’re admitted to the provincial directorate of youth and sports.

* Employees are admitted in PTT and they let their relatives in. The head of the district and the mayor were employing employees in all the institutions by calling them my brother, uncle, nephew.

* I’ve been mayor for 49 years and I can’t stand this situation anymore. I am always with my citizens.

* I never say that it should be taken from my family, I want those who need it to get a job.

*My head of the provincial organization called me and said, ‘I am uncomfortable with these issues, why didn’t you come to me’.

“I will continue to fight against illegal purchases”

*My provincial president said ‘be patient for 3-4 days’, I went yesterday and called him on phone, but he didn’t return even after I waited for 3-4 hours.

*Now, he became quite uncomfortable with this situation and after ignoring my warnings, I tendered my written resignation.

*From now on I am with my citizens and youth, now I am more comfortable. However, I did not resign from the parliamentary membership and I will continue my struggle on this issue.

*I will always fight against illegal recruitments and keep talking about them.

* I have been battling with them for two years, but I could not hear them. I haven’t found that representatives employ their relatives, but they do too.

* I have been a member of the council thrice and here I am the winner of AK Party thrice. This is a late resignation, but I have been patient and I apologize to my voters and youth.

* I will always be sensitive and fight against these illegal purchases.

“Our mayor and district president made their relatives sit”

*Recently, our AK Party mayor and AK Party district head set up a family business and hired them all saying ‘this is my brother, this is my uncle’s son, this is my nephew’ Is’.

This has caused great uneasiness among both voters and citizens.

He made the AK party zero. We arrived at the new settlement in Hasankif, and none of the Hasankif people own an inch of land.

* While about 450-500 of our youth were unemployed and powerless, these managers hired their relatives, siblings, nephews.

*I have resigned from the Batman administration, the AK Party, which has humiliated our President’s party with such negative comments.

*From today onwards I will be with my fellow citizens and the youth of Hasanqif. I apologize to my youth for not leaving the party till today due to these events.