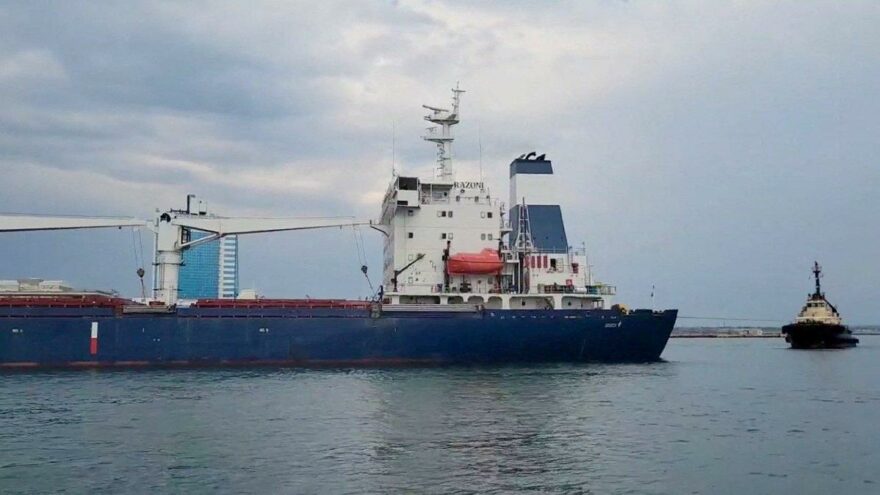 In a written statement from the Ministry of National Defense, he used the following statements:

* The ship carrying 27 thousand tons of corn to Lebanon and leaving the port of Odessa in the morning continues its cruise with the flag of Sierra Leone. The ship’s departure and course are planned and immediately monitored by the Joint Coordination Centre.

* The route to be followed during the departure of the ship, the humanitarian corridor, and detailed issues regarding its inspection are carried out in accordance with the procedures and principles agreed upon at the Centre. Ships carrying grain and similar food items are currently under preparation and planning from three Ukrainian ports.

Expected to reach Lebanon in 5-6 days

Sierra Leone flagged off dry cargo ship Rajoni, which left Ukraine’s Odessa port, to sail from Ukraine’s Odessa port to Tripoli port in Lebanon. The ship, carrying 26 thousand tons of corn, is expected to be inspected in Istanbul on 2 August and reach Tripoli on 5-6 August.

“My crew and I are very happy to have loaded the ship and returned home,” said the ship’s captain, Mohamed Abdoh. We hope that our infection will be safe. We have no reason not to believe the states and the agreement. This is good. I believe in Ukrainians and wish you the best. “I hope we will reach the discharge point in 5-6 days,” he said.

Saviano Abru, spokesman for the United Nations (UN) Office of the Coordination of Humanitarian Affairs in Ukraine, said the shipment of Ukrainian grain is of great humanitarian importance and expressed his thanks to the governments of the countries participating in the agreement. Support of UN Secretary-General Antonio Guterres.

Following a grain shipment agreement signed by Ukraine, Russia, Turkey and the United Nations (UN) in Istanbul on 22 July, studies were initiated for grain exports at the Ukrainian ports of Kornomorsk, Yuzhne and Odessa. (UAV)