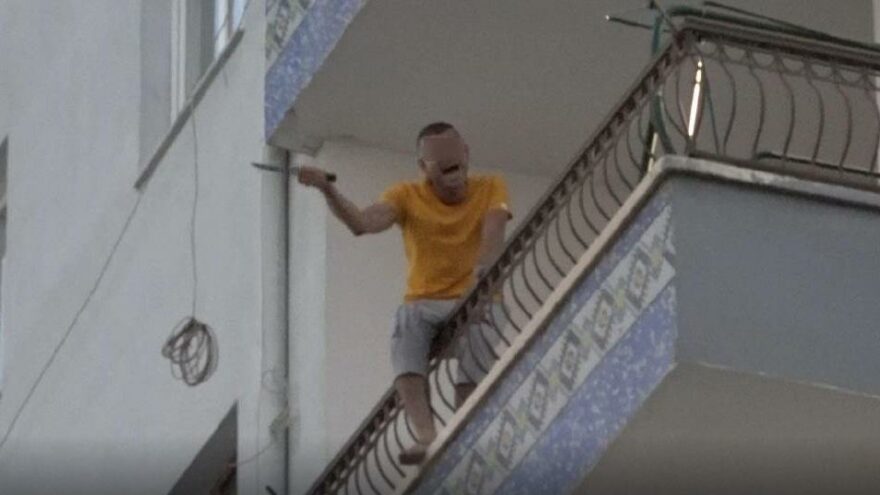 The incident took place on the fourth floor of the Ephraim Caliscan apartment building at 1872 Street in the Tassin District. According to the information received, Zulfu M. (33) had an argument with his wife for undetermined reason, got depressed after the argument and locked their 2 children in a room of the house. The man, who did not want to give his children to his wife, went to the balcony of the apartment with a bread knife found in the kitchen and put the knife around his neck.

Neighborhood residents, who saw the man who wanted to hurt himself with a knife and said he would jump off the balcony, reported the situation to the 112 emergency call center. On information Aksaray Municipality Fire Department team, 112 emergency aid and police teams were sent to the spot. When the man attempted suicide, his two children watched the incident with frightened eyes from the window of the room where they were locked. While firefighters who arrived on the spot shortly after, measures were taken around the building against the possibility of someone jumping in, but medical teams were ready just in case. The police team entered the man’s house and pulled the children out of the room they were in.

The police teams who tried to explain for a long time were sweating, but after giving the persuasion, after an hour of effort, he was brought down from the balcony. While the man, who wanted to commit suicide by taking his children hostage, was taken to the Provincial Directorate of Security to take his statement, the police teams did not take a picture of the man, so members of the press were removed from the scene. The person who was traveling in the police car that entered the garden of the building was immediately rescued. The investigation into the incident is ongoing. (UAV)