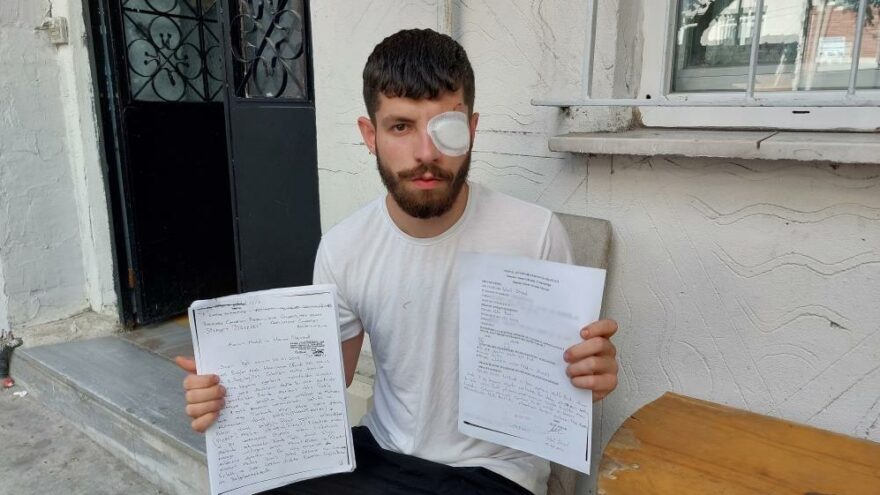 The incident happened last Saturday in Basilar Gunnesli. According to the information received, Selçuk Simsek, who worked in a textile printing company, asked for his insurance. For three months, imşek informed the management of his request for insurance.

Allegedly, imşek hung up for 3 months. Realizing that he was not insured, imşek first quit his job and then wanted to get the rest of his money. However, imşek was attacked by the boss and the accountant in the office. In the attack it was alleged that the accountant threw a glass of water at Simsek’s eye. The young man was seriously injured and was taken to the hospital. Imşek undergoing treatment here continued to undergo surgery for 4 hours.

It was said that the young man had vision loss in his eye after the surgery, and that he could only recover within 6 to 8 months. Subsequently, the young man accompanied his father to the Kukukkemes courthouse and filed a criminal complaint against the owner and the workplace at the prosecutor’s office, and later at SGK.

Selçuk imşek, 22, describes his experiences, saying, “I had a working period of 3 months at the company I worked for. They told me I would be insured when I got the job and they kept me busy like that When I saw that they were delaying me, I realized that they would not take my insurance, and when I looked through the e-government, my insurance was not visible. I quit my job and got another Got the job. After that, I went to ask for the rest of my money. At that time the boss talked about abusing and threatening. As the violence of blasphemy escalated, an argument ensued. The accountant said that he would give me my money He said, ‘I will bring you back to your lord’. I got angry and slammed my hand on the table. Then the owner and others grabbed me and the accountant threw the glass of water on the table in my face. Gave.

In 6 to 8 months, however, healing

Explaining that he would have vision loss for 6 months, Simsek said, “I had eye surgery because of the glass that burst in my eye. One was important. Plus, since there would have been a recovery period of 6 to 8 months.” Therefore, there is no clear vision in the eye or not. The doctor also does not say anything clearly. I demand my rights. I complained both to the prosecutor’s office and to the Social Security Institute (SGK). After the incident, the police came, told me By ambulance Istanbul Okmedani Prof. Dr. He was taken to Cemil Taşcıoğlu City Hospital. I can’t open my eyelids right now because of the stitches. When I open it, there is no clear image, I see it blurry, ” They said.

Speaking later, the 22-year-old’s father, Cervet Simzek, said, “I was not at home that day. My daughter called me and said that Selcuk had a small accident. When I went to the hospital, he had surgery. 6-7 days passed and no one from other side contacted us. We complained about them, we will not let them go.” (UAV)